Halton Police are investigating a “violent assault” near the border of Peel and Halton regions that left two men seriously injured.

Halton Regional Police said officers were called to the area of Winston Churchill Boulevard and Steeles Avenue shortly after midnight for reports of a “violent altercation.”

Police say that it appears multiple suspect vehicles surrounded another vehicle with three male occupants inside. Police said an undisclosed number of suspects then got out of their cars and attacked the three men with baseball bats. 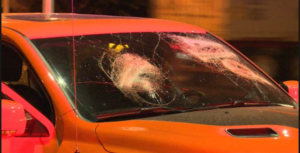 Police confirmed that the two of the victims sustained serious head injuries and were rushed to hospital for treatment. The third man suffered minor injuries.The victims range in age of 26 to 30 and are all residents of the Brampton area.

In a news release issued today, police said they believe the incident was a “targeted attack” and the suspects and victims knew each other.

The statement reads, “This is not a random incident and there is no threat to public safety.”

The assault is still under investigation with no arrests made so far.Police have also not provided any descriptions of possible suspects.

Investigators are asking anyone with information about the case to contact Halton Regional Police or Crime Stoppers anonymously.As part of the police investigation, northbound and southbound Winston Churchill Boulevard has been shut down between Embleton Road and Steeles Avenue.The area is expected to be shut down for a few hours.

Man in life-threatening condition after cooking mishap in Toronto

A sixty-five-year-old man is in life-threatening condition after he burned himself while cooking in the Church and Wellesley area Saturday night. Emergency crews were called to a building at 30 Gloucester Street, near Wabenose Lane, […]