Jade Nelson, a 20-year-old woman has been charged after four people were stabbed on a City of Brampton bus on Tuesday night.

Police were called to the area of Queen Street and McVean Drive at around 9:15 p.m. after multiple people were reportedly stabbed on a city bus.Officers located four victims in the area following the stabbing. 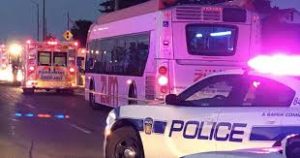 Three were taken to a local hospital for treatment and the fourth victim was transported to a trauma centre. Police has confirmed that none of the victims sustained life-threatening injuries.

One female suspect,  identified by investigators as 20-year-old Jade Nelson, was arrested at the scene.

Nelson, who is facing four counts of attempted murder, is scheduled to appear in court on Wednesday morning.

The motive for the stabbing is not known and police say it is unclear if the victims were targeted at “random.”

Passersby and transit riders were horrified at what transpired.

Jackson Boewda, a regular transit rider  said, “Looks like the bus was moving a bit and then things got crazy.The people on the bus must have been freaking out.”

Can anyone disguise oneself as retired U.S. marine and participate boldly at Remembrance Day events?

Stolen Valour Canada,a Canadian group that investigates and exposes people falsely claiming to be veterans alleges a man who took part in Remembrance Day events at three schools in Red Deer, Alberta, is an impostor […]

1 Canadian among at least 12 killed in Mexico bus crash, 3 injured.

Global Affairs Canada officials confirmed that there is  one Canadian citizen among the at least 12 people killed in a bus crash in eastern Mexico.The bus was carrying cruise ship passengers to a set of […]