Three people were rushed to hospital after a major crash on Highway 401 involving 5 vehicles including tractor trailers.

One of the tractor-trailers flipped over, trapping a man inside for roughly 25 minutes.

Toronto fire and paramedics pulled the man, believed to be in his 40s, from the vehicle. He was then taken to a trauma centre with serious but not life-threatening injuries. 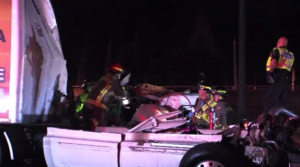 Another man was also rushed to a trauma centre with serious but not life-threatening injuries.A third victim was taken to hospital with minor injuries.

Mark Phillips, 36, was charged on Dec. 8 with aggravated assault and three counts of assault with a weapon after allegations that a man brandishing a neon baseball bat leapt from his BMW and attacked an […]