9 people are dead, and 16 more are injured, after a rental van mowed down pedestrians for close to three kilometers in north Toronto Monday afternoon. 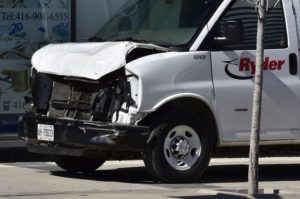 Emergency crews received a number of frantic calls around 1:30 p.m., after a white rental van mounted the sidewalk at the busy Yonge Street and Finch Avenue East intersection and struck a number of people.

From there, the van bearing a Ryder Truck Rental and Leasing logo – fled southbound on Yonge for several blocks toward Shephard Avenue West, hitting more people before coming to a stop on Poyntz Avenue. 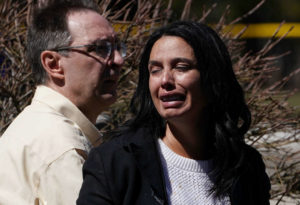 There, an eyewitness video shows the driver – standing next to the damaged van – pointing his hands at a police officer.

Kill me,” he yells, repeatedly gesturing his hand from his back pocket toward the officer. 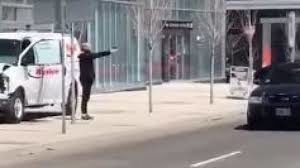 “No. Get down,” the lone officer calls back. Eventually, the man drops the object on the pavement and obeys the officer’s orders to get on the ground. He was taken into custody.

Toronto Police Deputy Chief Peter Yeun stressed at a press conference Monday evening that “all available resources have been brought in to address this tragic situation.”

He said police will be setting up two hotlines; one for victims’ families, and one for witnesses.

He added, “This is going to be a complex investigation.”

Michele Kelman, who works at an IT company with an office on Yonge St., said she was walking back to work after lunch with a friend when they heard screams . 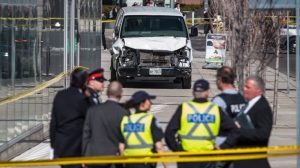 Ms. Kelman said she turned and saw objects and bodies flying through the air and the front end of a white van heading straight down the sidewalk toward her.

She turned instinctively, trying to shield herself, and the truck rushed past without touching her.

When she turned back she saw only carnage. “My friend was gone,” she said. “I couldn’t find her body for a while. There were a few around. And there were people trying to bring her back.”

Aerial footage from the scene showed multiple victims on the sidewalk covered with orange tarps, as police taped off the surrounding blocks. The area resonated with the sound of fire-truck and ambulance sirens and the thuds of rotors of helicopters flying overheard, as police spoke with witnesses.

The rental company extended its condolences to victims and said it is co-operating with police.

Claudia Panfil, spokeswoman for Miami-based Ryder System, Inc., said by e-mail Monday, “We are saddened by this tragic event, and our deepest sympathies go out to those impacted. We take the safety and security related to the use of our entire fleet very seriously and we are cooperating fully with authorities.”

Three people have died in a collision on Highway 22 near Highway 22X west of Calgary, EMS said Tuesday. RCMP said it responded to a call for a serious two-vehicle crash at around 3:10 a.m. […]

Chrystia Freeland, Foreign Affairs Minister told her Indian counterpart that Jaspal Atwal’s invitation to an event during the government’s official trip to India in February was “an honest mistake.” Freeland said she met with the Indian […]

The Prime Minister of Canada, Justin Trudeau has announced that Emmanuel Macron, President of France, will travel to Canada from June 6 to 9, 2018, for a working visit and to attend the 2018 G7 […]