A 38-year-old York Regional Police officer was killed in a head-on collision with an alleged impaired driver in Markham on his way to work on Wednesday morning.

The accident took place near Mackenzie Drive East and Warden Avenue around 6 a.m. involving a Porsche Cayenne and a Honda Accord.

YRP Constable Travis Gillespie, 38, was the Honda’s driver, and he was declared dead at the spot and 23-year-old Markham resident was the Porsche’s driver. He was taken to the hospital with unidentified injuries, According to a press release from the police.

It is with great sadness that I share the tragic passing of @YRP Constable Travis Gillespie who was killed in a collision on his way to work today. He is survived by his parents, loved ones and colleagues. This unexpected loss is devastating for all members of our organization. pic.twitter.com/JWa6UH5FUS

The Peel Regional Authorities Major Collisions Unit will handle the investigation, according to police, to prevent any service members from being traumatised by this tragedy. 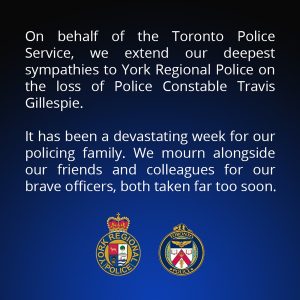 While an inquiry is being carried out, local roads are restricted. The region is to be avoided, and drivers are advised to consider taking another route, according to police.