Abhimanyu Chohan , a 15-year-old Indian-origin boy has been missing from his school in central England after reportedly being accused of cheating when he scored top marks in an exam paper.

Chohan went missing from King Henry VIII Independent School in Coventry on Friday after he scored 100 %  marks in a mock test and was worried about getting into trouble. 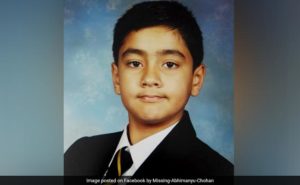 King Henry VIII School on its facebook page stated, “We are all concerned about Abhimanyu’s whereabouts and his safety and the school is working closely with the family and the police to locate Abhimanyu as quickly as possible.”

West Midlands Police said in its appeal this week, “Officers are concerned for his welfare after he disappeared from school, just before 8.30 am on Friday. We are appealing for any dog walkers, horse riders or members of the public out enjoying the warm weather to keep an eye out in rural and quiet areas as it’s thought Abhimanyu could be taking refuge there.”

It adds, “Abhimanyu is not in any trouble, we just need to know he is safe.”

Abhimanyu is described as 5ft 11ins tall, with short black hair and brown eyes. He is of a medium build and it is thought he could be wearing a navy-blue Nike t-shirt and khaki or beige chinos, with Puma trainers.

According to the police appeal, he could also be in part of his school uniform, which includes black trousers, black shoes and a black blazer.

Local media reports say that CCTV footage from a petrol pump in the city captured him walking with his rucksack.

Varinder Chohan, Abhimanyu’s father said, “We just want him back safe, this is so unlike him. He’s a bit of a high flyer, he’s a smart kid but he’s not street wise.”

He added, “We’re worried he may have thought he was in trouble because he got top marks on a mock exam paper I think he just panicked and took off but it’s been four days now and we are worried sick.”

The last one to see Abhimanyu is his mother Navneet as she dropped him off at the school gates last Friday.

Timmy Kinner, a Laos Angeles resident has injured nine people in a knife attack at a children’s birthday party in Boise, Idaho. Police believe that Saturday’s attack at a complex for refugees was motivated by […]