The security record of Government shows that 11 death threats have been made against Alberta premier, Rachel Notley. 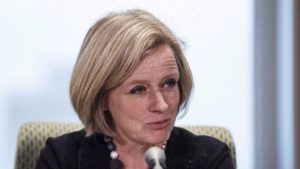 In a shocking incident on Jan. 31 2017, Notley’s office was tipped off by Canada Purple Shield, an insurance company specializing in pre-planned funerals, that a funeral home had received a completed application in the premier’s name — for her own funeral. 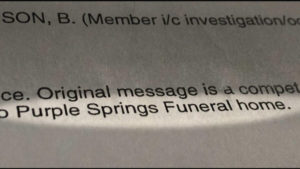 The threats began in September 2015 with a tweet and retweet of the message: “Really you dumb cow, be careful woman, or you’ll be the first assassination in Alberta.” 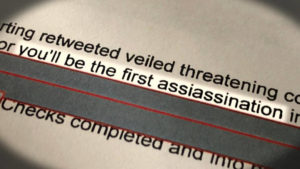 More recently, while door-knocking in March 2017, one of the premier’s office staff was confronted by an angry resident who said “if ___had a chance ___ would shoot Rachel Notley,” a redacted document states.

Notley’s photo has been defiled. She’s been called a Nazi.Aggressive public outbursts against the premier first surfaced during the politically charged Bill 6 debate in the fall of 2015.

The information is contained in documents called security “occurrence summaries” obtained by CBC under the freedom of information act from Alberta Justice covering the period May 5, 2015 — the day of the last provincial election — to Nov. 23, 2017.

There are 386 pages. Each page chronicles a separate “inappropriate contact and communication” or ICC incident. The incidents range from overly aggressive or insulting tweets to hate mail, vulgar photographs, unusual phone calls and outright death threats.

Notley declined to comment on the volume of the threats, or how they affect her job. 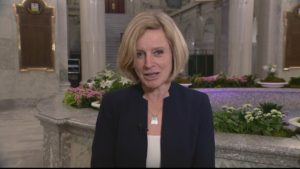 During a news conference to proclaim May as sexual assault awareness month, Notley said it’s her policy not to comment on personal security issues.

Man robbed in Brampton neighbourhood while buy and sell meeting

Police dogs searched a Brampton neighbourhood after a man was robbed of his smartphone and cash Sunday afternoon during what appears to be a buy-and-sell meeting. The robbery occurred just before 4 p.m. on Corby […]

Prime Minister, Justin Trudeau,  issued the following statement after a terrorist attack in Edmonton today: “The Government of Canada and Canadians stand with the people of Edmonton after the terrorist attack on Saturday that sent […]