Alek Minassian who is  named by police as the Toronto attack suspect is referred to as a socially awkward computer whiz by friends.

Minassian was a socially awkward computer whiz-kid who may have harbored an obsession with US mass killer Elliot Rodger. 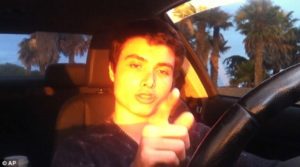 Shortly before the attack, a Facebook profile with the same name uploaded a post which read: ‘All hail the supreme gentleman Elliot Rodger’.

The post also mentioned ‘incel’, which is a term used to refer to men who have been made ‘involuntarily celibate’ because women continually reject their advances. 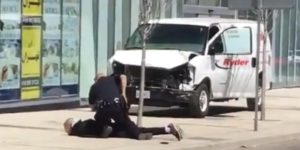 ‘The Incel Rebellion has already begun! We will overthrow all the Chads and Stacys! All hail the Supreme Gentleman Elliot Rodger!’

Chad is a term used to refer to sexually active men among the incel community.
Social media posts by an account linked to Minassian mentioned US mass shooter Elliot Rodger and a community called ‘incel’ which is made up of mostly men who are rejected by women, and are therefore ‘involuntarily celibate’
Rodger killed six people and then himself at the University of Santa Barbara in 2014 after recording a manifesto in which he ranted against ‘entitled s**ts’ who rejected his advances.

While Rodger did not directly identify himself as incel, the video manifesto he uploaded before carrying out his bloody rampage – in which he plots to kill ‘entitled s**ts because they rejected him – has made him an incel figurehead.

In the video, Rodger describes himself as ‘the supreme gentleman’. He killed six people at the University of California Santa Barbara in 2014, before killing himself.

Elsewhere, a LinkedIn account under Minassian’s name revealed him to be a student of Seneca College, in the North York neighborhood where the attack took place.

There, classmates told the Globe and Mail that he was a socially awkward computer studied student.

One person who had worked on a project with Minassian said he appeared to suffer from a social disability, and had physical tics that he struggled to control – shaking his hands and tapping his head.

The student added that Minassian had not lined up any work after college, and did not appear to have strong religious or ideological affiliations.

While police have not publicly discussed a motive for the attack, Canadian Public Safety Minister Ralph Goodale said he does not believe it was terrorism.

B.C. lawyer resigns after writing himself into client’s will

A Kelowna lawyer, Christopher Roy Penty who admitted to adding his name to a client’s will and pocketing more than $100,000 of a legacy meant for charity has resigned from the Law Society of B.C. […]

Finance Minister Bill Morneau delivers his third federal budget today,  a fiscal plan meant to strengthen the economy by promoting gender equality and bringing more women into the workforce. The budget is also expected to boost science and […]

Joshua Burgess,31 a Calgary man has been sentenced to life in prison for killing his wife because he wanted her to “stop talking” before hiding her body outside the home they shared. Burgess pleaded guilty […]