Last Tuesday, an 18-year-old teen named Mahakpreet Sethi was fatally stabbed in the Tamanawis Secondary School parking lot in Surrey’s Newton neighborhood, B.C. He was attacked after a fight with a 17 year old boy.

After being taken to the hospital, Mahakpreet died due to severe injuries. Police detained the suspect at the scene, who is still in custody.

The mother of 18 year old Mahakpreet Singh Sethi spoke to the media for the first time. Parents of Mahakpreet claimed that the department promised to contact us, but we haven’t heard from them despite the fact that we haven’t seen our son in person till now.

‘At least show our son’s face,’ said the parents.

“We got to know about our son’s murder around 3 pm, three hours after he was stabbed. Neither the police department nor the school department contacted us” said Sethi’s mother. 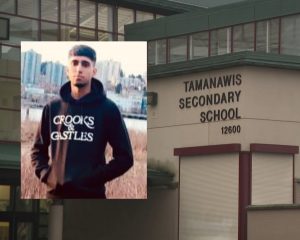 To demand justice for their killed son, Mahakpreet Singh’s parents are holding a candlelight march on November 27. It will start from Tamanawis Secondary School to 72 Avenue Scott Road at 3 p.m. The parents of Mahakpreet ask for support from the community in the fight for justice.

The stabbing provoked a heavy police response at the school, which is located at 12600 66 Avenue, because it happened on school grounds during school hours.