Atul Kochhar, a popular Indian-origin chef in the UAE, was  sacked by a Dubai hotel after he courted controversy by posting an anti-Islam tweet that caused outrage on social media. 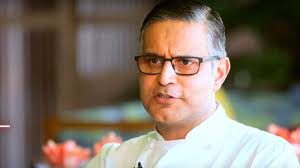 Kochhar who is the second Indian to receive a Michelin star, is well known for his Rang Mahal restaurant at the JW Marriott Marquis Hotel, Dubai.

He caused a commotion after taking a dig at Bollywood actor Priyanka Chopra over an episode in American television series ‘Quantico’ that purportedly portrayed Hindu nationalists as terrorists.

Bill Keffer, general manager of the hotel, was quoted as saying by the Gulf News, “Following the recent comments made by Chef Atul Kochhar, we have taken the decision to end our agreement with him for Rang Mahal. With the termination of our agreement, Chef Atul will no longer be associated with the restaurant.”

According to the hotel, the restaurant will continue to operate without the chef’s affiliation.

“At the JW Marriott Marquis Hotel Dubai we pride ourselves on creating a culture of diversity and inclusion for our guests and associates across the hotel and our restaurants. We also remain committed to delivering the traditional culinary experience and high service standards that Rang Mahal is renowned for,” the hotel statement added.

Reacting to the hotel’s move, Kochhar said he was “deeply upset” by the hotel’s decision to cut ties with him.

“The decision by JW Marriott Marquis Dubai is deeply upsetting, however I fully accept the great pain I have caused and the difficult position the hotel has been put in,” the paper quoted him as saying.

He added, “I hope my friends and well-wishers in Dubai will forgive me and continue to support me in the future.”

In his controversial tweet on Sunday, Kochhar had said, “It’s sad to see that you (Priyanka) have not respected the sentiments of Hindus who have been terrorised by Islam over 2000 years. Shame on You (sic).”

He later deleted the tweet and apologised for the “major error” that was “made in the heat of the moment”.

The tweet had caused outrage on social media with the twitterati calling for firing the chef.

Israel to join US in quitting Unesco

Israel has said it will join the US in pulling out of the UN’s cultural organisation Unesco, after US officials cited “anti-Israel bias”. US announced to leave UNESCO, citing concerns of an “anti-Israel bias” and […]

The rescue team were struggling on Saturday to reach five coal miners who were trapped nearly 1 km underground in southern Poland after an earthquake. The 3.4 magnitude quake hit the Borynia-Zofiowka-Jastrzebie mine on Saturday morning, trapping […]