Bill C-45 gains approval of the Senate.Senators have voted to pass the federal government’s Bill C-45 that will lead to legalizing recreational marijuana.
The Bill passed by a vote of 52 to 29, with two abstentions, paving the way for a fully legal cannabis market within eight to 12 weeks. 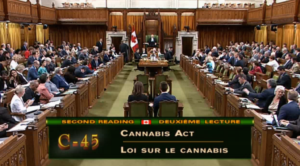 Sen. Tony Dean, who sponsored the bill in the Senate, “I’m feeling just great. We’ve just witnessed a historic vote for Canada. The end of 90 years of prohibition. Transformative social policy, I think. A brave move on the part of the government.”
“Now we can start to tackle some of the harms of cannabis. We can start to be proactive in public education. We’ll see the end of criminalization and we can start addressing Canada’s $7 billion illegal market. These are good things for Canada.”

Dean said he thought the Senate functioned well throughout the process and he was proud of the work the Red Chamber did.

The Canadians will be able to purchase and consume recreational marijuana legally by mid-September at the latest.The bill got approval after 7 months of study.

It’s been too easy for our kids to get marijuana – and for criminals to reap the profits. Today, we change that. Our plan to legalize & regulate marijuana just passed the Senate. #PromiseKept

The government had previously planned for the bill to be passed by both houses of Parliament in time for retail sales to begin by July 1. That timeline was pushed back after the Senate requested more time to review the bill.

Now that the bill has passed, it’s up to Prime Minister Justin Trudeau and his cabinet to choose the actual date when the legalization of recreational marijuana becomes law of the land. Bill C-45 comes with a provisional buffer period of eight to 12 weeks.

Quebec and Manitoba have already decided to ban home-grown weed, despite the fact that the federal bill specifies that individuals may grow up to four plants per dwelling.

The Senate’s amendment was intended to avoid legal challenges of the provinces’ constitutional authority to prohibit home cultivation.