Consumers at government-run British Columbia liquor stores will face purchase limitation from Friday due to a strike that is still going on at distribution centres by BCGEU.

According to the B.C. Alliance of Beverage Licensees (ABLE BC), the government-owned BC Liquor Stores will restrict how much customers can purchase in a single transaction. The group claims that these restrictions will also affect clubs, bars, and restaurants. 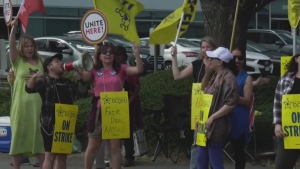 The Alliance of Beverage Licensees of BC (ABLE BC) confirmed that all customers will be rationed to no more than three of any individual items of liquor except beer. Refreshment beverage goods in 4-pack, 6-pack, and other packaging will be counted as one product.

This will continue up until the Liquor Distribution Branch (LDB) distribution centres start up again.

“We are aware of rising supply restrictions and want to do everything we can to assure fair access to products for all consumers during the (B.C. General Employees Union) job action.” According to a statement from LDB.

“This is insane. This needs to stop, before it becomes worse. Before this strike further affects British Columbia’s economy, we request both parties to return to the negotiating table “according to Jeff Guignard, executive director of the Alliance of Beverage Licensees (ABLE).

After months of negotiations, the BCGEU gave the province a 72-hour strike notice on Friday. At four BCL distribution centers—in Delta, Kamloops, Richmond, and Victoria—picketing started on Monday afternoon.