The three accused, including the female student, were put in seven days of police remand by Mohali’s Kharar court.

Accused Sunny Mehta and his friend Pankaj Verma had allegedly threatened to make women student’s private videos viral if she didn’t film and share videos of hostel inmates in the common washroom, Punjab police stated in its initial investigation.

Three persons are in custody of Punjab Police- a girl, first year MBA student, a 23 year old man from Himachal Pradesh who is rumoured to be her boyfriend and his 31 year old friend.

“We have seized the girl’s phone away and given it over for forensic testing,” said ADGP Gurpreet Deo.

In the recent development of the case the students said that there were leaked videos of approximately 60 girls taking baths in the hostel. However, the university said in a statement that one video was distributed. Furthermore, it was captured and distributed by the accused. They claimed that the girl made the video and shared it with a friend in Himachal Pradesh. 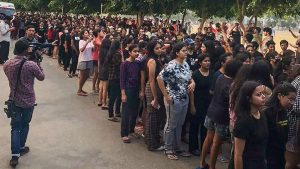 “There are rumours that 7 girls have committed suicide, but no girl has attempted any such step. In connection with the incident, no girls have been admitted to the hospital, according to a statement from Chandigarh University’s chancellor, R.S. Bawa.

FIR in this case has been filed under Section 354-C (voyeurism) of the Indian Penal Code and the Information Technology Act, and additional investigation is under way.

Meanwhile the investing is going on, The University declared “non-teaching days” up until September 24, at which point many students went home. Two wardens were also suspended for negligence.