Renata Ford, Rob Ford’s widow has launched a multimillion-dollar lawsuit against brothers-in-law Doug and Randy Ford and their family businesses claiming she and her children were left out of millions of dollars. 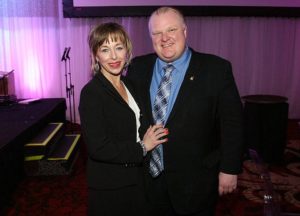 In the suit filed Friday in Ontario Superior Court, Renata Ford says Doug and his brother Randy, who run the Ford family businesses, “conspired together” to deprive her and her children of shares in the family company Deco Toronto and the proceeds of a life insurance policy. 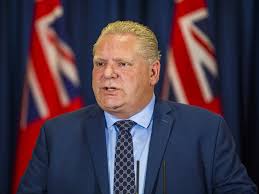 The allegations( not yet proved in court) come just three days before the Ontario provincial election, which sees Doug Ford’s Progressive Conservatives in a neck-and-neck race against the New Democrats.

In a statement Monday, Doug Ford characterized the claims made in the lawsuit as “completely false,” saying he has stood by his brother and family “through so many of their challenging times.”

Doug Ford said, “Renata’s lawyers have been clear to us throughout this campaign, that either we hand over money, or they would go public with these false claims, and that is exactly what they have done, with three days to go until the election.”

The suit claims $5 million in damages for each of the three plaintiffs: Renata Ford and her two children, Stephanie and Douglas. It also claims a further $250,000 against each of the five defendants: three of Doug Ford’s companies as well as Doug and his brother Randy. 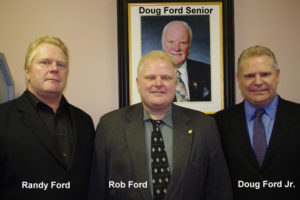 The suit alleges that in the early part of 2017, Deco Companies was reorganized and that led to a loss of some $6 million.

After the death of Doug Ford Sr. in 2006, the suit claims, Doug and Randy Ford arranged for “extravagant” salaries for themselves, which included bonuses, travel and allowances for vehicles, “regardless of the financial performance” of the businesses.

A statement sent by a PC Party spokesperson on behalf of Diane Ford, mother of the Ford brothers, says “it is heartbreaking that Renata has chosen to bring forward these false and baseless allegations against our family, right in the middle of a provincial election campaign.”

“Renata has serious struggles with addiction, and our hope is that she will accept help for the sake of herself and my grandchildren.”

WestJet Plane was struck by Sunwing Aircraft. One of the WestJet  planes that had just arrived in Toronto from Cancun Friday night was struck by a Sunwing aircraft, that lead to flames and prompted an […]

New Investment Will Be Used to Develop Long-Term, Innovative Housing Solutions TORONTO — The Ontario government is providing municipalities and urban Indigenous community partners with an additional $150 million to continue to protect vulnerable people […]

Real-Time Courses Make It Easier for People to Get Essential Qualifications TORONTO ― As the province safely and gradually reopens, the Ontario government is investing $3 million to provide free online health and safety training […]

The Prime Minister, Justin Trudeau, today announced that he will hold a virtual Cabinet retreat and a Cabinet meeting next week. During the retreat, the Prime Minister and ministers will discuss how we move forward […]