A dust storm hit Delhi and Chandigarh on Monday night, hours after a weather forecast that parts of northern and eastern India were likely to witness a thunderstorm, accompanied by squall and hail on May 8.

Strong gusts of wind hit several parts of the national capital with power cuts and uprooted trees being reported. 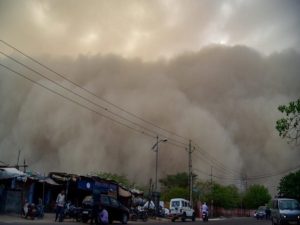 The storm, with a wind speed of 70 km/hr, hit Delhi around 11.20pm, an official at the Safdarjung observatory said.

The change in weather came after the Capital experienced a hot day, with the maximum temperature of 39.6 degrees Celsius, a notch above the season’s average.

Authorities issued a list of dos and don’ts and shut evening shifts at all schools in the wake of the weather department warning. Schools were also closed in Ghaziabad and some parts of Noida. 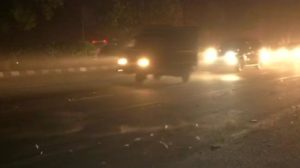 The Delhi Traffic Police urged people to take precautions while commuting and the Delhi Metro said it was on alert for heavy rain and thunderstorms.

Dust storms hit Chandigarh and Punjab and Haryana on Monday evening when several places in the region reported power cuts. The Haryana government has cancelled the leaves of all officials in municipalities. Fire and other emergency services, too, are on alert.

At least 124 people were killed and more than 300 others injured in five states last week due to dust storms and rain.