In a joint effort by the Vancouver Police Department, and the Combined Forces Special Enforcement Unit of British Columbia, seven people were arrested and four guns seized.

The media release by Police reads that Crown Counsel has approved numerous charges against the gang members that includes conspiracy to commit murder, firearms offences, and extortion.

Supt. Mike Porteous of the VPD said in the media release, “Project Temper, a gang violence suppression operation, has resulted in the dismantling of the Gill Group. This violent crime group was comprised of several individuals including its leader, Taqdir Gill.” 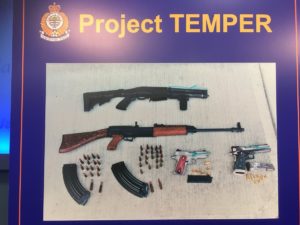 RCMP Assistant Commissioner Kevin Hackett, who is also Chief Officer of CFSEU-B.C., said that the joint operation against gangs will continue.

Hackett said in the media release.“Our continued collaboration with the Vancouver Police, the RCMP, and other police agencies in the Lower Mainland, is critical.”

Wind gusts up to 90 km/h expected today in GTA

Greater Toronto Area are under a special weather statement ahead of the arrival of heavy winds that could gust up to 90 kilometres an hour. A high of 24 C is called for in Toronto […]

Drivers faced a rough commute to work this morning as a lake effect snow band drifted into the region in some areas of GTA. The snow impacted those travelling along the QEW and the Gardiner […]