The gun violence is on the rise in GTA. Shooting at a Scarborough housing complex playground has sent two children to Sick Kids Hospital.Paramedics reported that the children are sisters, ages 5 and 9, but their injuries are no longer life-threatening. 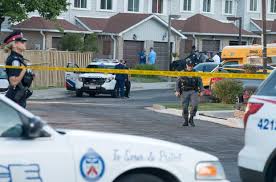 Police Officers were called to the McCowan Road and Steeles Avenue area in Scarborough around 5 p.m. on Thursday.

SHOOTING UPDATE: Two children, ages 5 and 9, are being treated in hospital for their injuries. Police are on scene on Alton Towers, continuing the investigation ^mg

Det. Sgt. Jim Gotell called the incident “a very brazen attack on two young girls” and confirmed to reporters that the youngest of the two was in serious condition

Police believe that 11 children were playing in the park when a man stepped out of a car in a nearby parking lot and started firing into the park with a handgun.

Gotell said, “While the gunfire was ongoing, two young girls were shot, “male adult” who was in the park is believed to have been the intended target.

Police are looking for both the driver of the vehicle and a male suspect who fired the weapon. They are also looking for the intended target who has not come forward to police.

Gotell had a message for the suspects: “We’re coming for them.”

Today’s shooting is a totally unacceptable act of gun violence. I have spoken to Chief Mark Saunders and he has assured me that Toronto Police are doing everything possible to catch those responsible for this despicable crime.

I want no stone left unturned in dealing with this,” he continued. “I cannot imagine the anguish the family and friends of the two girls shot while playing in a park are experiencing tonight. This entire city wants these girls to make a full recovery and this entire city wants justice for them.”

He said, “Some cowards came into this neighbourhood and opened fire into a playground.This act is despicable and rest assured that we’ll put the adequate resources on to resolve this one.”

Police canvassing the neighbourhood and watching video taken at the scene. There are reportedly several surveillance cameras in the area. “We are going to do anything and everything we can to restore safety in this neighbourhood,” said Saunders.

Neighbours were using napkins to try to stop the bleeding.

Calgary residents would see no new tax increases in 2018 under the proposed city budget but their property tax bills would still grow by 2.9 per cent, on average, as a one-time tax rebate expires. That’s because […]