Hailey Baldwin and Justin Bieber left her Brooklyn apartment holding hands on Friday as the model spoke out to deny that they’ve already tied the knot.

The outing came after the duo were seen at a New York City courthouse on Thursday, going in front of a judge and sparking speculation that they are already legally married.

But the 21-year-old blonde beauty took to Twitter on Friday to say, ‘I understand where the speculation is coming from, but I’m not married yet!’

And as they stepped out on Friday there were no wedding bands to be seen.
It is now rumoured that the couple, who started dating in June, will have a big ceremony in Canada next week. 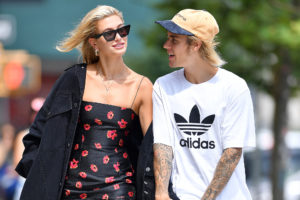 People had reported that the couple had already tied the knot inside the courthouse with the help of a judge, ahead of throwing a party at a later date.

And despite Hailey’s denial that they are already wed, People claims via sources connected to the couple, that it’s simply the case that the Tommy Hilfiger model doesn’t consider herself officially married yet.

A source said Hailey ‘feels a civil ceremony and their ‘real’ wedding are two separate things.

‘What happened at the courthouse is a courthouse thing — a legal thing. But marriage is two people making a vow before God and the people they love.’ they added.

The website had earlier reported that the couple made it legal on Thursday at the courthouse, which was first reported by TMZ.

‘They went ahead and did it without listening to anyone,’ a source close told the site

Justin Bieber and Hailey Baldwin are engaged, a source close to the singer has confirmed. According to CNN, the development came when the singer popped the question to the model during a trip to Bahamas […]