The public is being warned about possible exposure to the measles after a child with the disease recently flew into Pearson International Airport.

Public health officials are warning people who travelled on two Saudia Airlines flights last month, as well as those who went to a Toronto hospital last week, may have been exposed to measles. 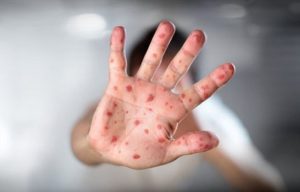 The agency issued an alert on today, May 7 after confirming that a child who returned from Jeddah, Saudi Arabia on April 30 does have the measles. Toronto Health said the child arrived at the airport on Saudia Airlines flight SV0061 around 9:45 a.m.

They’re also warning that anyone who attended pediatric outpatient services at Toronto’s Humber River Hospital on Friday, May 4 between 9 a.m. and 2:30 p.m. that they may have been exposed.

The health agency says measles is highly contagious and spreads easily. Health officials added that those who haven’t received two doses of a vaccine for the disease are at risk and that those 12 months of age or younger, women who are pregnant and those with compromised immune systems could get very sick if they come down with the measles.

Toronto Health advises those who think they may have been exposed should be on the lookout for symptoms that include “a high fever, cold-like symptoms (cough/runny nose), sore eyes or sensitivity to light and a red rash lasting four to seven days.”

More information can be found at toronto.ca/community-people/health-wellness-care/diseases-medications-vaccines/measles-fact-sheet.

Ontario Auditor General Bonnie Lysyk released a special report today on the Wynne government’s move to cut hydro bills by 25 per cent, with an election around the corner. She said in the report that […]

Eight people are injured, two of them critically, following a serious rollover on the Queen Elizabeth Way in Burlington. OPP Sgt. Kerry Schmidt said that the Toyota minivan lost control, slammed into a guardrail and […]

Minister Navdeep Bains and Federal NDP Leader compete in Dance off at Seva Spark 2018 Seva Spark 2018, an event was organized Brampton to raise money for the Seva Food Bank that helps feed over […]