Police in Brampton, Ontario attempted to stop a car who was causing havoc on a residential street, and the driver, a 31-year-old Quebec male, is now facing a number of charges. 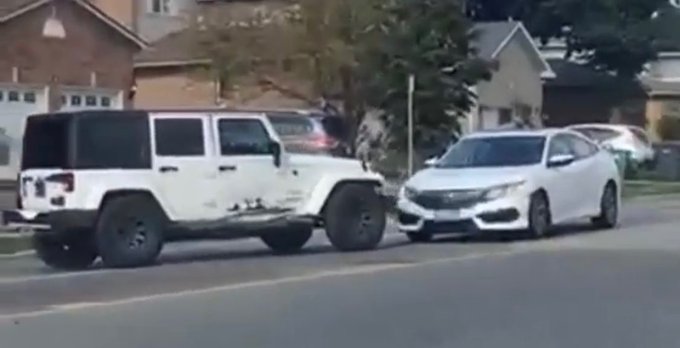 Around 3:15 p.m. on Thursday, a concerned civilian reported a patrol officer near Queen Street West and Chinguacousy Road about a white Jeep that was driving erratically close by.

At Chinguacousy and Drinkwater roads, the police ultimately located the vehicle.

“They made several attempts to make sure that the vehicle would come to a stop. They (the Jeep) did try to evade police as you can see in the video,” according to constable Heather Cannon, who spoke on Friday.

Amazing work by our officers! This situation could have had serious consequences to the public and our @PeelPolice officers. The quick response by our members and the vigilance of one of our community members helped save lives yesterday! pic.twitter.com/KZag8Fkodl

Two officers can be seen confronting the Jeep’s driver on a property’s front lawn in a video of the incident that was shared to Twitter.

Police vehicles can be seen parked all around the Jeep in a different video that was uploaded to Twitter.

Police verified that the Jeep’s driver and two passengers had been detained and charged on Friday.

Peel Regional Police is aware of the video circulating on social media. The driver of the white Jeep was arrested at the scene for impaired-related offences. There were no reports of injuries. Thank you. pic.twitter.com/BhsxGSman4

Yudhbir Randhawa, the driver, was from St. Constant, Quebec, and was 31 years old. He was brought to a nearby hospital for evaluation and was kept for a Friday bail hearing.

Seven counts are brought against Randhawa, including possession of a controlled substance such as heroin or methamphetamines, fleeing from a peace officer, and operating a vehicle while under the influence of narcotics.

Randhawa, according to authorities, has a criminal past that includes “convictions for dangerous operation of a motor vehicle, escape from police, and drug-related offences.”

The two passengers, Harpreet Saggu, 41, of Brampton and Jashanpreet Singh, 23, of Lasalle, Quebec, were both accused of drug-related offences.

With an agreement to appear in court in November and December, respectively, Saggu and Singh were both released on an undertaking.