On Thursday, Virat Kohli smashed his 100th six in a T20I match, becoming the tenth player overall and the second Indian batsman to reach this milestone.

The milestone we'd all been waiting for and here it is!

Virat had completed his anxiously awaited 71st century. With 12 balls and six sixes, he slammed an unbeaten 122 in just 61 balls.

Virat now ranks eighth in T20I cricket in terms of sixes with a total of 104.

Martin Guptill of New Zealand, who has 172 sixes overall, has the most in this format. Following him are Rohit Sharma (171), Chris Gayle of the West Indies (124), Eoin Morgan of England (120), and Australian opener Aaron Finch (117). 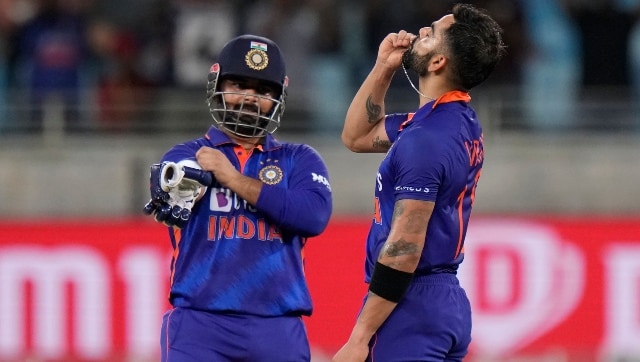 Star Indian batsman Virat Kohli dedicated his century to his wife, Bollywood actress Anushka Sharma, and their young daughter after scoring his much anticipated 71st century in international cricket.

“And I kissed my ring. You see me standing here because one person has put things in perspective for me. That’s Anushka. This hundred is for her and for our little daughter Vamika as well. When you have someone next to you having conversations putting things in perspective, like Anushka has been… when I came back I was not desperate. Six weeks off I was refreshed. I realised how tired I was. Competitiveness doesn’t allow it, but this break allowed me enjoy the game again,” he added.

Talking about the game, Virat Kohli led India to a magnificent 212/2 in their 20 overs.

KL Rahul and Virat Kohli led Team India to a strong start when they were put to bat first by Afghanistan. India was 52/0 at the end of the powerplay and six overs, with Virat (25*) and Rahul (26*) remaining undefeated.

Even after the powerplay, Virat and KL maintained their dominance over Afghanistan. The two maintained a strong pace for the scoreboard. India had 87/0 after 10 overs thanks to Rahul’s (42*) and Virat’s (44*) contributions.