Students from Conestoga College and other colleges from all across Ontario marched to Queen’s Park in Toronto on Thursday, November 17, to peacefully protest against increased tuition fees for international students.

The protest campaign, called the “Need or Greed” by the students, urges the Ontario government to reduce tuition costs and freeze international tuition fees for the 2023–2024 academic year. Colleges are being accused of increasing fees through greed!

Domestic students also supported the movement to support their friends and raise voice against the increasing fees.

Students from Conestoga University, along with groups from six other universities asked the government to consider how these price increases are affecting international students.

The average cost of an academic year for domestic students in Ontario is $8,000, with more than half of that amount being supported by financial aid, according to Statistics Canada. Whereas the annual cost for international students is around $15,000. 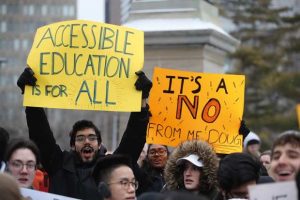 Sana Banu, president of Conestoga Students Inc., said: “We do not qualify for any subsidy, and that is understandable because we are not the taxpayer base. However, we do see that the gap between domestic and international is growing further.”

One of the international students from the protest shared “When I came to Canada everyone was going out and enjoying the weekend. I didn’t know what the weekend was, because I was busy working, saving every penny so I could afford my fees.”. “Then surprise, fees were increased, I had to borrow money and now my living quality is much worse.”

The campaign’s participating student organizations call for a freeze on international tuition fee, a cap on tuition increases, predictable tuition, and financial security for next academic years.