Peel police have identified the third man as Jaspal Uppal, wanted in connection with a viscous attack on a man living with autism.

It happened at a Mississauga bus terminal back in March. 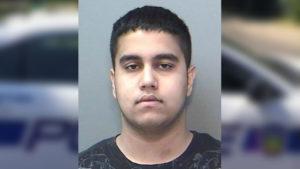 A video of the attack released by police shows the victim sitting at the bottom of a stairwell putting on roller blades when three young men approached from behind and began to punch and kick him.

Two of the three men believed to be responsible for the assault were arrested in the weeks following the video’s release and charged with aggravated assault.

However, the third suspect had remained unidentified until now.

A Canada-wide warrant was issued on Thursday for Jaspaul Uppal, a 21 year-old man of no-fixed address.

Police have released an image of Uppal and are asking any witnesses or anyone who may have information that would be pertinent to the investigation, to call 905-453-2121 (ext. 1233).

Ontario Auditor General Bonnie Lysyk released a special report today on the Wynne government’s move to cut hydro bills by 25 per cent, with an election around the corner. She said in the report that […]