Peel Regional Police are asking residents to use the force’s Buy and Sell exchange zones for safe online transactions after “several robberies” this summer.

Six instances of robberies have been investigated since June of would-be buyers and sellers being robbed after agreeing to make a purchase on online selling sites such as Kijiji.In some instances, cash is taken while in others, the product is taken.

#PRP investigating several robberies in relation to buying/selling goods online. We encourage you to meet at our Buy and Sell Exchange Zones at 22 Division in #Brampton and 12 Division in #Mississauga. Check out our video for more info: https://t.co/jBWxsltAOt

A Brampton man, who only wanted to be identified as Nev, said someone is using his parent’s home in the area of Sandalwood Parkway West and Chinguacousy Road as a meeting point for people to come buy or sell cellphones.

He said through an e mail,“The victims are told to come to the house, meanwhile the suspect(s) hide at the side of the house or in the back awaiting.Once the victim arrives, the suspects approach them and rob them of their cellphone or cash. Some (are) being held at knifepoint or being physically assaulted. The suspects are able to escape via the ravine in the back.” 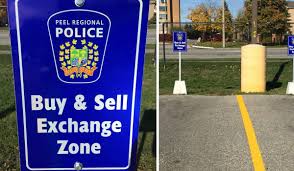 As a precaution towards these violent and traumatizing incidents, Peel police created two Buy and Sell Exchange Zones, safe meeting places to exchange products after online transactions, in 2016.

“It is a safer place to do (the exchange),” said Const. Courtney-Carver Smith. “(These buildings) are active 24/7, there are dedicated cameras and the area is well lit, whether it’s daytime or evening.”

Carver Smith added that If the buyer/seller doesn’t want to meet at one of the police exchange zones, that might be a “red flag” for potential issues relating to safety or fraud.

The zones are in the 22 Division parking lot at 7750 Hurontario St. in Brampton, south of Steeles Avenue, and 12 Division at 4600 Dixie Rd. in Mississauga. Anyone can use the spots.