oday, Liberal leader Justin Trudeau was in Brampton South to meet with three local families to talk about the need to make life more affordable. Trudeau announced that a re-elected Liberal government will cut taxes for the middle-class and lower cell phone bills by 25 per cent. 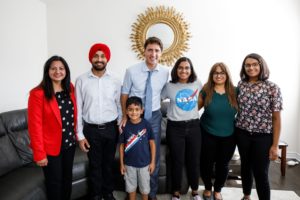 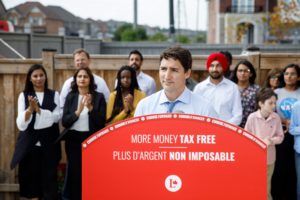 Middle class families are feeling stretched. Taxes, fees, and bills pile up while wages are not keeping up. Cell phone bills in particular put a lot of pressure on a family’s budget, with Canadians paying up to twice as much for wireless services than people in other G7 countries. Enough is enough. It’s time for hard-working Canadians to get a bigger share of the pie.

“I’ve been talking to Canadians across the country and I keep hearing the same thing: even with our strong economy and record unemployment, it’s still tough to make ends meet,” said the Leader of the Liberal Party of Canada, Justin Trudeau. 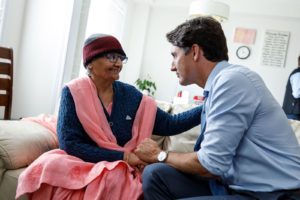 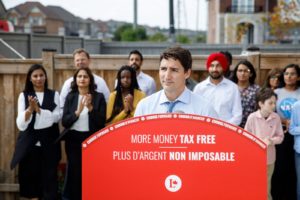 “I know Brampton families are feeling the cruch. Groceries. Cell phone bills. Child care. It all adds up. Today’s announcement is about giving families the support the most,” said Sonia Sidhu, the Liberal candidate in Brampton South.

To start, a re-elected Liberal government will:

Ensure middle class Canadians, and the people working to join the middle class, pay no federal taxes on the first $15,000 they earn;
This means that about 700,000 more Canadians, including seniors and young people starting their careers, will pay no federal tax at all;
And will lift about 40,000 Canadians out of poverty.
This will be done by raising the Basic Personal Amount (BPA) by almost $2,000 for people earning under $147,000 a year.

While Andrew Scheer’s tax plan would give a bigger break to wealthier Canadians, our plan lowers taxes the most for people who make less, helps the middle class, and ensures that the wealthy don’t get an extra hand up. Our tax cut would also help lift twice as many Canadians out of poverty than the Conservatives’.

A re-elected Liberal government will also reduce the cost of wireless services by 25 percent within four years. This will be done by:

Working with telecom companies to offer plans at globally comparable prices;
Encouraging Canadian competition in the market, and allowing the CRTC to step if that competition isn’t leading to lower prices; and
Prioritizing consumer choice and affordability, and not simply the highest bidder, when awarding new wireless expansions.
“The Conservatives spent a decade cutting taxes for corporations and millionaires,” said Mr. Trudeau. “Now, Andrew Scheer’s tax cut would benefit the wealthiest more than those who need it most. We know better. Millionaires don’t need another tax break. But the middle class does.”

A yearbook photo of Liberal Leader Justin Trudeau wearing “brownface” makeup is surfacing on the internet, which might cause trouble to him during federal election campaign. His photo depicts Trudeau wearing a ‘brownface’, turban and robe, […]

Member of Parliament for Brampton North, Ruby Sahota on Sunday applauded the Sikh Motorcycle Club for their hard work and for strongly advocating religious freedoms. “From the right to serve while wearing a turban to […]

On Headline Canada This Week, Watch Bill Morneau And Sonia Sidhu Speak On The 2019 Federal Budget

April 17, 2019 priyadarshinee upcoming program Comments Off on On Headline Canada This Week, Watch Bill Morneau And Sonia Sidhu Speak On The 2019 Federal Budget

On Headline Canada this week, watch Rupinder Chauhan in conversation with Finance Minister Bill Moreneau who visits Brampton to talk about Federal Budget 2019, along with other guests including Member of Parliament for Brampton South, […]

The permit for Calgary-based TC Energy’s Keystone XL pipeline has been revoked by U.S. President Joe Biden revoked today after being sworn in as the 46th president U.S.. This is the $8 billion pipeline permit […]

January 18, 2021 Comments Off on Khalsa Aid Nominated For The Nobel Peace Prize

Members of the Canadian Parliament nominates the UK-based international NGO Khalsa Aid for the Nobel Peace Prize. The official submission was submitted yesterday by the Canadian MP Tim Uppal, Mayor of Brampton Patrick Brown, and […]

Arrest Made After Threats Made on Social Media

January 18, 2021 Comments Off on Arrest Made After Threats Made on Social Media