Peel Regional Police are looking for witnesses and video after a man was found dead at a Brampton home early morning today.

Officers initially responded to Martree Crescent, in the area of Bovaird Drive East and Highway 410, around 4:45 a.m. for reports of a shooting. 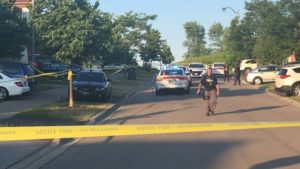 When they arrived, they found a man dead with “what appeared to be gunshot wounds,” Const. Iryna Yashnyk said.

There’s no word yet on the description of the suspect or whether a getaway vehicle was involved.

Yashnyk said police are in the neighbourhood canvassing for home security video or dashcam footage that may have captured the suspect.

Residents in the area were horrified to learn what happened on their normally-quiet street.

It’s believed to be Brampton’s ninth homicide of the year.Police is looking for atleast one suspect.

Canada ranks second on list of countries with highest consumption of opioids.

Acc. to International Narcotics Board data for years 2013-15, Canada in on second rank in case of opioid consumption Canada is now the second-largest per capita consumer of prescription opioids (exceeded only by the United […]

Prime Minister, Justin Trudeau,  issued the following statement after a terrorist attack in Edmonton today: “The Government of Canada and Canadians stand with the people of Edmonton after the terrorist attack on Saturday that sent […]

India’s 72nd Independence Day was celebrated by Indians in Toronto, Canada by organising the India Day Festival and Grand Parade on Sunday. Several notable dignitaries from all levels of government participated in the India Day […]