Matthew Jarvis, 40, was heading to a store in B.C. on Saturday evening when his motorized wheelchair somehow got stuck in the train tracks at a crossing.

Two women came to his help realizing Jarvis was in trouble and rushed to help get him off the tracks, but moments later, an incoming train struck and killed the father of three. 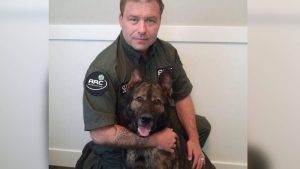 Jarvis’s partner, Valerie Schneider   thanked those who tried to help, “Some angels of God tried to help him and whoever you are, I thank you, my family thanks you from the bottom of our hearts.”

The train struck one of the women in the arm, but she is expected to recover. Jarvis died on the scene.

Jarvis, a former K9 security guard, was just getting his life back together after a near-death car crash in 2017 left him unable to walk. 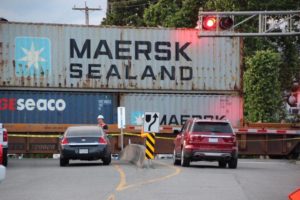 Schneider is asking for sensors or cameras to be installed at crossings that would notify conductors when someone is on or around them. She says this would give trains more time to stop and could prevent future accidents

Some residents say this intersection has a history of collisions and that Jarvis isn’t the only to die on this busy route.

Jim Ryan, a resident nearby said, “It’s very busy actually.There will be days when we only get two or three (trains) and then other days they seem to go by like every hour.”

The CN Police Service is working with the RCMP in the investigation.

Litigation over patent infringement is part of BlackBerry Chief Executive John Chen’s strategy for making money for the company, which has lost market share in the smartphone market it once dominated. Blackberry, the Canadian tech […]

A small Saskatchewan town opened its doors on Christmas morning to a Via Rail train with almost 100 passengers that suffered mechanical problems due to extremely cold weather. A Toronto-bound Via Rail train experienced a mechanical […]