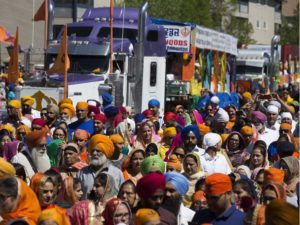 Thousands of participants made Edmonton’s Khalsa Day Parade a huge success. The parade held today witnessed an ocean of colourful dresses and turbans that graced the streets of Mill Woods, Edmonton.

People happily marched in beautiful sunny weather amid sounds of drums and prayers. 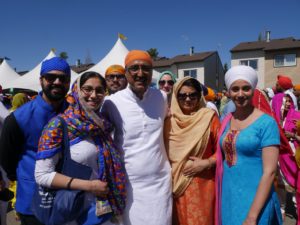 Gray shared, “It’s one of the biggest events in the city, it’s huge and it’s such a great community event when people come out to share culture and everyone is welcome.”

The parade started with an approximately two-kilometre walk to the Gurdwara Siri Guru Singh Sabha, where there were speeches, drinks and food, then continued another two kilometres back to the Gurdwara Mill Woods. 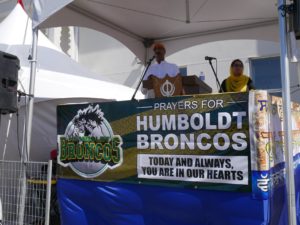 Performers and members of the growing Sikh Motorcycle Club, which was founded last year participated in the parade

He said,“There’s a lot of colourful people around here and it’s just a good day, you couldn’t have asked for better weather.”

Whether its children of any age or adults, all seem to enjoying the vibrant colours of dresses and ambience created by the parade.

University student first in B.C. to be approved for $750K drug Soliris.

Shantee Anaquod, a 23-year-old battling a rare disease, has been approved to receive coverage for Soliris, a $750,000 drug that, until this week, was not covered in B.C. Health Minister Adrian Dix announced today that Soliris will […]