At least 5 people were killed in Thursday afternoon shooting incident, happened in the news room of ‘The Capital Gazette’ newspaper in Maryland Capital Annapolis, situated 30 miles east of Washington DC. 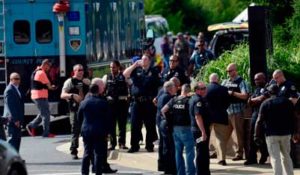 others injured taken to a local trauma center. The building has been evacuated and searches are on, said Police
The shooting suspect has been engaged and arrested.
The suspect remains in custody & is being interrogated, Anne Arundel County Executive told reporters.
A reporter from the news paper mentioned in the tweet that it appeared a single shooter was responsible for attack, who fired through a glass door to the office.