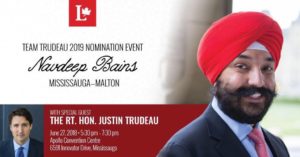 Navdeep Bains is nominated as the Liberal candidate in Mississauga—Malton. With less than 500 days until election day, a series of nominations are now set to move forward across the country in the weeks ahead.

Bains first served as the Member of Parliament for Mississauga–Brampton South from 2004 to 2011, and has also served as Canada’s Minister of Innovation, Science and Economic Development since being re-elected as the MP for Mississauga—Malton in 2015.

The Liberal Party of Canada’s new nomination process supports unprecedented new engagement with Canadians, the re-election of the dedicated Liberal team in Parliament, and the election of even more talented, diverse, and hardworking community leaders as Liberal MPs in 2019.

The event will take place at 6591 Innovator Dr Mississauga ON L5T 2V8.

The $200M retail centre- ‘Asian Style Mall’ is going to be opened in Calgary with focus on small merchants specializing in international goods and flavours.Roughly 99 per cent of the available mall space has been […]

Three people have died in a collision on Highway 22 near Highway 22X west of Calgary, EMS said Tuesday. RCMP said it responded to a call for a serious two-vehicle crash at around 3:10 a.m. […]

The United Nations Declaration on the Rights of Indigenous Peoples (UNDRIP) was adopted by the General Assembly on Thursday, 13 September 2007. Bill C-262 is an act to ensure that the laws of Canada are […]