Investigators from the Homicide and Missing Persons Bureau have made arrests in Palwinder Singh’s murder case,  Region’s 16th homicidee of the year.

On July 16, 2018, at approximately 6:00 p.m., officers responded to a residence on Donwoods Court in the City of Brampton. Officers arrived on scene and located the victim suffering from obvious signs of trauma. The victim was pronounced deceased at the scene. 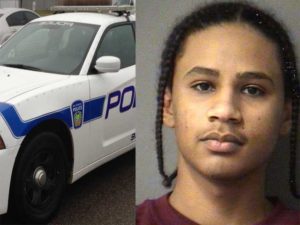 The victim has been identified as Palwinder Singh, a 27-year-old male from Brampton.

A Canada Wide arrest warrant was previously issued for the arrest of Nebill Albayaty an 18 year-old male from Toronto.

On July 23, 2018, investigators attended a hotel in Hamilton where they located Nebill Albayaty. He was arrested on the strength of the existing Canada Wide Warrant. Investigators also located and arrested the fourth outstanding suspect in the company of Albayaty.

Hamas Khan, an 18 year-old male from Mississauga, was arrested and charged with First Degree Murder. Both Albayaty and Khan will be making a court appearance on July 23, 2018.

Anyone with information regarding murder of Palwinder Singh, or any other information pertaining to this investigation, is asked to call investigators at the Homicide and Missing Persons Bureau at (905) 453-2121, ext. 3205. Information may also be left anonymously by calling Peel Crime Stoppers at 1-800-222-TIPS (8477), or by visiting http://peelcrimestoppers.ca/.

Liberal MP Raj Grewal “welcomes the challenge” if NDP leader Jagmeet Singh chooses to run against him in Brampton East.

Liberal MP Raj Grewal says if the new NDP Leader Jagmeet Singh chooses to run against him in Brampton East, Ont., in 2019, he would “welcome the challenge” to compete against the man who just […]

New data from the 2016 census reveal the city is truly Canada’s trilingual metropolis. Quebec made international headlines when its legislature voted 111-0 in November in favour of a motion calling on store clerks to […]