The Nobel Prize in literature will not be awarded this year following sex-abuse allegations and other issues that have affected the public image of the Swedish Academy that selects the winner.

It will be the first time since 1949 that the prestigious award has been delayed. Last year, Japanese-born British novelist Kazuo Ishiguro won the prize.

The Nobel Prize in Literature 2018 has been postponed. The Nobel Foundation supports the Swedish Academy’s decision. Press release: https://t.co/eayNN3YgYv

The academy announced today that the 2018 prize will be given in 2019.

“We find it necessary to commit time to recovering public confidence in the Academy before the next laureate can be announced,” Anders Olsson, the academy’s permanent secretary, said in a statement. 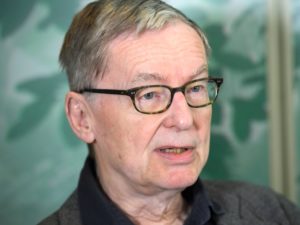 He said the academy was acting “out of respect for previous and future literature laureates, the Nobel Foundation and the general public.”

The internal feud within the Swedish Academy — which only hands out one of the six Nobel prizes — was triggered by an abuse scandal linked to Jean-Claude Arnault, a major cultural figure in Sweden who is also the husband of poet Katarina Frostenson, an academy member.

The academy later admitted in a report that “unacceptable behaviour in the form of unwanted intimacy” took place within its ranks, but its handling of the allegations shredded the body’s credibility, called into question its judgment and forced its first female leader to resign.

The academy said that “work on the selection of a laureate is at an advanced stage and will continue as usual in the months ahead but the Academy needs time to regain its full complement.”

The Nobel literature prize was not given out on seven occasions, primarily due to war but in 1935 because no candidate was deemed worthy of the prize. On a further seven occasions, the award has been postponed, as is proposed in this case.

Russia holds summit on how to stabilize Syria.

The leaders of Russia, Turkey and Iran met today to discuss ways to advance a political settlement in Syria as ISIS is nearing its defeat, while disparate Syrian opposition groups met in Saudi Arabia in a […]

Non-resident Indians (NRIs) who have invested in the Public Provident Fund (PPF) may have got temporary relief for now.  A few months ago in October, the Department of Economic Affairs (DEA) had said that if […]

Kim says: Button for nuclear weapons is on my table

North Korean leader Kim Jong Un said today  that the United States should be aware that his country’s nuclear forces are now a reality, not a threat. But he also struck a conciliatory tone in […]