A University of Toronto female student has died following a fire at a Scarborough home early this morning. The name of the student has not yet been released but it is confirmed that she was student of U of T.

The fire broke out at a single, detached house on Haida Court, near Morningside Avenue and Ellesmere Road, shortly before 2:30 a.m. 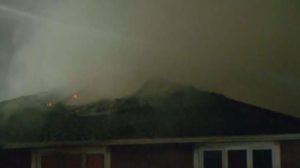 Three occupants, one female and two males, escaped the fire and were rushed to hospital for treatment.

Firefighters were called to the area after receiving multiple calls.Deputy Fire Chief Jim Jessop said crews were met with heavy flames and smoke when they arrived on scene.

Jessop said, “One of them actually escaped by jumping out of the second-floor window.”

A fourth occupant, identified as a woman in her 20s, was later found dead on the second floor of the home.

All four occupants are students od U of T.

He added, “It was a significant fire, significant damage. We have structurally instability at this time. That’s one of the reasons why we have to leave the deceased in the building at this point until we can make it safe for our crews to safely remove her.”

The cause of the fire has not yet been determined.

“We will be working with the OFM and Toronto police certainly over the next day or two as the investigation proceeds,” Jessop added.

Montreal emergency rooms are overloaded with injuries from icy sidewalks. The Jewish General Hospital, Lachine Hospital, Verdun Hospital and Hôpital Jean-Talon are reporting overcrowding in their emergency rooms. Other hospitals, such as St-Mary’s and Lakeshore, […]

Transport Canada is bringing in new lighting rules for vehicles to improve road safety.New manufacturing standards will kick in for all new cars sold in Canada in 2021 to stop so-called “phantom vehicles” — cars with no lights […]