There is a very popular trend after incidents of mass violence to reach for an immediate explanation.

“They need to be able to think they can find out why such a thing has happened so that things can be done to try to prevent it from happening again,” says Dr. Sandy Simpson, chief of forensic psychiatry at the Centre for Addiction and Mental Health (CAMH).

Less than 24 hours after last weekend’s deadly mass shooting in Toronto that killed two people and injured 13 others, the family of the man responsible tried to put the pieces together.

In a statement, Faisal Hussain’s family said the 29-year-old struggled his entire life with “severe mental health challenges,” including depression and psychosis. The family briefly detailed their own struggle to get Hussain help, no doubt a familiar one for whose loved ones live with mental illnesses.

“While we did our best to seek help for him throughout his life of struggle and pain,” they wrote, “we could never imagine that this would be his devastating and destructive end.”

In the days that followed, reporters have picked through the details of Hussain’s life: the teacher he confided in almost a decade ago about wanting to kill someone, his affinity for replica handguns, and his belief, per a police source, that he was the Joker from the Batman movies. 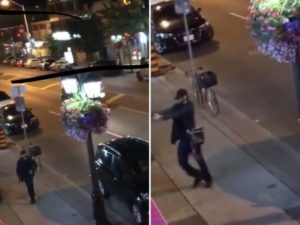 But in cataloguing every detail about Hussain’s mental health, piece by piece, what risk is there in conflating mental health issues with violence?

“It’s sort of popular parlance, only a crazy person would do a thing like that,” explains Sherry Glied, dean of the Robert F. Wagner Graduate School of Public Service at New York University.

“That’s just the way we talk about these things.”

However, Glied says, mental health issues as an indicator of violent behaviour is not a helpful way to predict and prevent future violence.

That does not necessarily mean that there isn’t a link between mental illness and violence.

But the nuance of it too often gets lost in the stream of revelations following violent attacks. In studying homicides, researchers have found those who have a psychotic illness are four to five times more likely to be violent than the general population. But even then, Simpson notes, just five per cent of homicides can be attributed to serious mental illness.

“The journalist’s search for a mental illness explanation of aberrant acts will almost always succeed,” Glied wrote in that research paper. It’s a numbers game.

“People are talking more about how we shouldn’t be making that link but that’s something that will not change overnight,” he says.

Hosseiny has been heartened this week to see people on social media push back at the idea that mental health is a predictor of violence. It’s a form of support, he says, when people pause and say, “Let’s wait until we know all the details before we make a conclusion… let’s not just link it to mental illness.”

That matters, Hosseiny says, because numerous wellness campaigns have worked doggedly over the years to encourage people to speak up about their mental health struggles, to get the help that they need. Narrow public discourse after a violent attack has the power to hamper those efforts.

People with mental illnesses might go back into hiding for fear of being judged and labelled and untreated mental illness only gets worse.

Danforth killer had no criminal record, but guns, gangs and drugs weren’t far away

July 29, 2018 priyadarshinee Canada News Comments Off on Danforth killer had no criminal record, but guns, gangs and drugs weren’t far away

The man who shot and killed multiple people on Toronto’s Danforth Avenue last Sunday had no criminal record but illicit activity including guns, drugs and street gangs was not far from Faisal Hussain. Last Sunday, […]

It is a frightening prospect: the Danforth shooting could have been much worse. Faisal Hussain was carrying seven magazines of ammunition, each containing up to 15 bullets, when he stalked the Danforth on Sunday night […]

A nursing student, Danielle Kane, 31, who took a bullet to the spine while rushing to help a wounded victim of the Toronto Greektown shooting is gradually coming out of a medically induced coma, but […]