Former Ontario Progressive Conservative leader Patrick Brown has filed a defamation lawsuit against CTV News over its reporting of what he alleges are false accusations of sexual misconduct.

Brown, who stepped down in January hours after the CTV report, alleges the network and several journalists involved in the story acted maliciously and irresponsibly in publishing the accusations brought forward by two women. 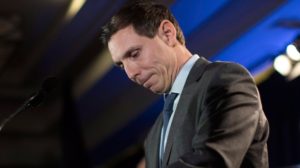 In his statement of claim, the Barrie, Ont., politician says CTV and its reporters failed to properly scrutinize and verify the allegations, which date back to his time as a federal MP.He further alleges the network gave him only hours to respond before broadcasting the story on Jan. 24.

Brown has vehemently denied the allegations, which have not been independently verified by the Canadian Press, saying there are discrepancies in the women’s stories. He is seeking $8 million in damages and an order that CTV remove all material suggesting he provided underage girls with alcohol.

CTV says it stands by its reporting and will vigorously defend it in court. Brown’s allegations have not been proven in court and a statement of defence has not yet been filed.

Brown’s claim alleges the CTV reports ruined his political career and, in doing so, interfered with the democratic process.

The document says, “Until the defendants destroyed his personal and professional reputation and demolished his political career, Mr. Brown was expected to become the next Premier of Ontario.”

Jagmeet Singh, the federal NDP leader  who isn’t on the public payroll because he remains unelected  has never drawn a salary from his party and doesn’t intend to receive a paycheque until its finances “significantly” […]

In autumn annual reports, Julie Gelfand,Environment Commissioner  says Ottawa has not done enough to identify the risks climate change poses to more than $66 billion in physical assets or determine how it can keep providing […]

May 6, 2021 Comments Off on Man Charged After Producing Fraudulent COVID-19 Document

Region of Peel – Officers from the Airport Division at Pearson International Airport have charged a man, after he allegedly used a fraudulent COVID-19 document upon arriving from an international destination. On Saturday, May 1, […]

Applications open tomorrow for new pathway to permanent residency for over 90,000 essential temporary workers and international graduates of a Canadian institution

May 5, 2021 Comments Off on Applications open tomorrow for new pathway to permanent residency for over 90,000 essential temporary workers and international graduates of a Canadian institution

May 5, 2021—Ottawa—Last month, the Honourable Marco E. L. Mendicino, Minister of Immigration, Refugees and Citizenship, announced an innovative pathway to permanent residence for over 90,000 essential workers and international graduates of a Canadian institution […]

May 3, 2021 Comments Off on In court, seven Manitoba churches are questioning the province’s COVID-19 pandemic forces.

As defiance to public health restrictions spreads across Canada, this case is one of many. Seven rural Manitoba churches are attempting to persuade a judge that the province’s lockout measures are unjustified violations of Charter-protected […]