Former PC Leader Patrick Brown is attempting a political comeback less than six months after he was forced to step down as leader of Ontario’s Progressive Conservative Party.

Brown officially entered the race to become chair of the Region of Peel on Tuesday(July 3). He said he decided to re-enter politics after consulting his advisers, including former Ontario premier Bill Davis, along with community and cultural leaders. He said he is looking forward to the non-partisan nature of municipal politics, noting he began his political career as a city councillor. 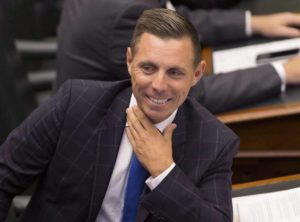 He said, “I still love public service. I love helping people. I love bettering our community.They say adversity makes you stronger and I’m up for the task of dealing with the challenges that face Peel Region.”

Brown – who many observers had expected would become Ontario’s next premier – instead resigned as PC Leader in January amid allegations of sexual misconduct broadcast by CTV. Mr. Brown has denied the allegations and launched a lawsuit against the network. CTV News says it stands by its reporting.

Brown preferred not to run in the recent provincial election after he was barred from running as a PC candidate in March. Doug Ford, who took the party’s reins after a hasty leadership race, won a majority government last month.

Brown is writing a book about his ouster titled Take Down: The Political Assassination of Patrick Brown. The book was slated for release on Nov. 1, a few days after the municipal election, but Brown said he is now hoping to publish later in November.

Brown has restarted his law practice and held positions in the private sector. He has also kept a busy schedule attending community events, documenting his appearances with photos on Twitter. He recently changed his Twitter handle to @patrickbrownont from @brownbarrie, deleting the reference to the city of Barrie in his former riding.

Brown, who joins six other candidates vying to lead Peel Region, just west of Toronto, said his priorities as chair would be to attract more high-paying jobs to the region, combat traffic gridlock by improving public infrastructure and give police more resources. Brown aded he has long ties to the region, including that he used to practice law in Brampton and that his fiancée, Genevieve Gualtieri, is from Mississauga.

Brown said he moved to Mississauga a few months ago.The Oct. 22 municipal elections will mark the first time the chair of Peel Region is elected and not appointed.

McDonald’s will soon banish cheeseburgers and chocolate milk from its Happy Meal menu in an effort to cut down on the calories, sodium, saturated fat and sugar that kids consume at its restaurants. The aim […]