Toronto Police say that more than 800 officers across the GTA were part of an early-morning raid targeting an alleged criminal organization. 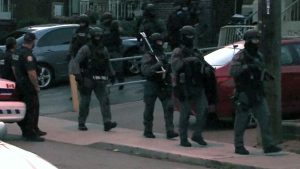 More that 50 search warrants were executed at 5 a.m. Thursday by Toronto police alongside Peel, York and Durham regional police departments.

More information has been released at a 10:30 a.m. news conference at Toronto police headquarters.

Toronto police said 70 individuals have been arrested and a “dangerous street gang” was disrupted as a result of more than 50 search warrants executed.

Nigeria Police say that two Canadians and two Americans  who were kidnapped in Nigeria’s north-central Kaduna state on Tuesday have been freed and are in good condition. State police commissioner Agyole Abeh said that police […]

Riverstone Golf Club to be converted to a recreation centre.

Brampton City Council has authorized staff to proceed with the purchase of the Riverstone Golf Club, including the clubhouse building and surrounding valley lands. The clubhouse, located near McVean Drive and Queen Street East, will […]