Quebec Health authorities say up to 70 people may have died  as a result of heat-related complications since the beginning of an early July heat wave that saw temperatures climb to more than 40 C with the humidex. 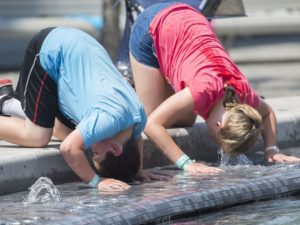 Temperatures have since cooled off across the province and a spokesperson with Quebec’s Public Health Department says Monday it would no longer be giving updates on heat-related deaths because “the situation is back to normal.”

Most of the deaths occurred in Montreal, with 34 cases reported to authorities.

The city’s morgue became so overcrowded during the heat wave that it partnered with a funeral home, where it sent bodies for storage.

Montreal’s public health office says the majority of people who died in the city during the heat wave were over 60 and suffered from chronic illnesses.

More than 100 crashes reported across GTA due to bad weather

More than 100 crashes have been reported across the Greater Toronto Area as it experiences a wintry blast of weather in the form of freezing rain and ice pellets. OPP urges drivers to stay off […]