Rankirat Singh, 20 of Brampton is wanted in connection with the assault involving baseball bats that injured three people. All three victims are from the Brampton area.

Police are urging Singh, and the individuals involved, to contact a lawyer and arrange for their safe surrender to investigators. 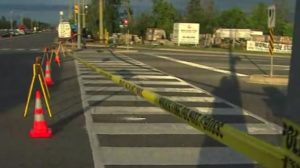 Two men are still in hospital where they’re listed in serious but stable condition.A third victim suffered minor injuries and is recovering at home.

Investigators have learned that the incident originated over a dispute involving a real estate transaction. The dispute culminated into the violent assault yesterday.

Police say that one of the victims brokered a real estate deal between a Brampton property owner and the suspect earlier this month, and the victim received a deposit from the suspect to lease the property.

The property owner declined the lease offer and asked the victim to return the deposit to the suspect.

Police say that the discussions between the victim and the suspect -regarding the declined offer- grew heated resulting in the victim fearing for his safety.

The victim and two friends travelled to a pre-arranged meeting area to return the deposit to the man shortly after midnight on June 20.

That’s when they saw several vehicles with numerous men -allegedly including the suspect- standing around carrying what appeared to be bats and sticks.

The victims tried to flee in their vehicle but were surrounded and beaten at a red light on Winston Churchill Blvd. and Steeles Ave. in Halton Hills.

Anyone with information regarding this incident is asked to contact acting Det. Dylan Price of the 1 District criminal investigations bureau at 905-825-4747 ext. 2422.

No more traffic and parking ticket quotas for police in Montreal

Montreal’s widely loathed quota system for traffic tickets is over, says Mayor Valerie Plante, as are lucrative performance bonuses for bosses that were tied to lower-level cops reaching the targets. Drivers aren’t getting off easy, […]

The federal Liberals are expected to announce a number of planned changes at Canada Post, including to the Crown corporation’s financial rules. Public Services Minister Carla Qualtrough is expected to roll out the new plan at […]