Kanahus Manuel, a spokesperson for the activist group Tiny House Warriors, was arrested by the RCMP after defying an evacuation order from the British Columbia’s North Thompson Provincial Park on Saturday morning. The woman was taken into custody after a Trans Mountain pipeline protest. 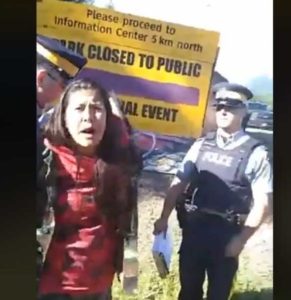 The protesters are members of the Secwepemc First Nation who call themselves the “Tiny House Warriors.” The group has been occupying a site in the provincial park located north of Kamloops, B.C., since last week in protest against the Trans Mountain pipeline project.

The group which asserted their right to the area has been called “unceded, unsurrendered, Secwepemc territory,” by her. The group has brought in three tiny houses which were built over the past 10 months and Manuel said their plan is to place these and others into the pipeline’s construction path.

Manuel also tweeted the eviction notice her group had received from B.C. Parks.


Dawn Roberts with the B.C. RCMP says officers went to North Thompson Provincial Park to meet with the protesters and discuss the eviction notice, which Roberts says was successful after Manuel’s arrest.

Snutetkwe Manuel says her sister has been charged with mischief after the group refused to leave the park, although Roberts did not confirm that formal charges have been filed.

Three regions of Canada face restrictions due to the rise in cases.

In Canada, three provinces just entered the second pandemic wave that are hardest hit by Covid-19. The three areas post good Friday are trying to adjust to the various public health measures implemented to control […]

Krish Sidhu,Vancouver entrepreneur,who regularly travels to Las Vegas, was at the Mandalay Bay hotel on Sunday night, near the same floor as the shooter only minutes before bullets were fired into the crowd of concertgoers […]

Towns and cities can’t be made fireproof but definitely can be made more robust.

As of Thursday, more than 200 active wildfires were raging throughout British Columbia, with the vast majority consuming large swathes of land in the province’s interior. They are among the 786 that have devoured almost […]