A shooting incident in Mississauga has sent the customers in shock crying for help.Peel Regional Police are hunting at least one suspect. 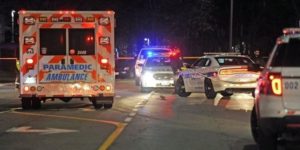 “It was insane. It was at least three ‘bang bang bang,’ and then all this screaming,” said Tania Manzone, who was entering the Sobeys grocery store just after 6:30 p.m. when the shots rang out at the Brittany Glen plaza, at the corner of Tenth Line West and Thomas Street. “We just stayed inside the store.”

Manzone said some employees in the store were crying after the gunfire erupted.

Peel Regional Police confirmed shell casings were found in the parking lot, but no one was injured.

Heavily-armed tactical officers and police dogs responded to the scene and are scouring the area looking for suspects.

At least one gunman is on the loose.