Karenjit Kaur The Untold Story of Sunny Leone: Sunny Leone’s biopic web series title has left the Sikh community filled with anger even before its release. 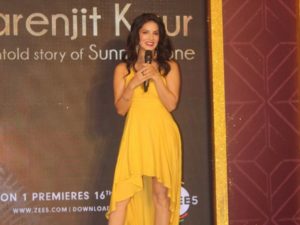 Sunny’s real name is Karenjit Kaur and her parents were a Sikh. She was however ,sent to a Catholic school due to security reasons .However ,as a teenager she used to visit a Gurudwara every Sunday.Despite changing her own name and removing the suffix Kaur , Sunny and her husband Daniel Weber last year adopted a 21 month old girl child from Latur ,Maharashtra and gave her name Nisha Kaur Weber. 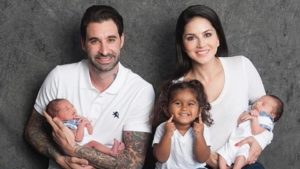 Shiromani Gurdwara Parbandhak Committee (SGOC) Spokesperson Daljit Singh Bedi has objected to the suffix Kaur which is being used in the biopic.

Singh said, “She changed her religion and cannot use Kaur with her name.It is a very pious suffix given to Sikh women by the Sikh gurus.The person who is not a follower of Sikh religion cannot use Kaur.She should tender a public apology as the title has insulted Sikhs.”

Akali Dal’s women wing chief Bibi Jagir Kaur has also demanded withdrawal of Kaur from the title of the web series being released on Monday.

“She is using Kaur word to make the series a success.We demand removal of the title as this will hurt the religious sentiments of Sikhs ,” Jagir Kaur said.

Neither the series makers nor the Sunny Leone herself have reacted to the objections raised by the SGPC. Sources say SGPC officials were also consulting legal eagles to get the suffix removed from the title of the series.

This will be the first time when an artist will be playing her own role in biopic based on her real life.

However the Sikh religious leaders, who are making a hue and cry on the title of web series, remained silent when Sunny used Kaur after the name of her daughter.

Manjinder Sirsa, a member of the Akali Dal, said “We have no objection with her profession, it’s her personal life. Our only objection is simply that we want them to remove the surname ‘Kaur’ because when she herself had earlier dropped ‘Kaur’ from her name then why it is being used now? We have urged the Chairman of Essel Group, Subash Chandra, to immediately remove it or face the consequences.”

6 Canadians got sick due to E. coli contamination in romaine lettuce

Federal health officials report that 6 Canadians have been stricken by a strain of E. coli that has a similar genetic fingerprint to romaine lettuce from the U.S. southwest that has already sickened 149 people […]