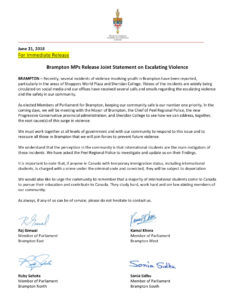 “Recently, several incidents of violence involving youth in Brampton have been reported, particularly in the areas of Shoppers World Plaza and Sheridan College. Videos of the incidents are widely being circulated on social media and our offices have received several calls and emails regarding the escalating violence and the safety in our community.

As elected Members of Parliament for Brampton, keeping our community safe is our number one priority. In the coming days, we will be meeting with the Mayor of Brampton, the Chief of Peel Regional Police, the new Progressive Conservative provincial administration, and Sheridan College to see how we can address, together, the root cause(s) of this surge in violence.

We must work together at all levels of government and with our community to respond to this issue and to reassure all those in Brampton that we will join forces to prevent future violence.

We understand that the perception in the community is that international students are the main instigators of these incidents. We have asked the Peel Regional Police to investigate and update us on their findings.

It is important to note that, if anyone in Canada with temporary immigration status, including international students, is charged with a crime under the criminal code and convicted, they will be subject to deportation.

We would also like to urge the community to remember that a majority of international students come to Canada to pursue their education and contribute to Canada. They study hard, work hard and are law abiding members of our community.

As always, if any of us can be of service, please do not hesitate to contact us.”

Calgary residents would see no new tax increases in 2018 under the proposed city budget but their property tax bills would still grow by 2.9 per cent, on average, as a one-time tax rebate expires. That’s because […]