Just before 7 p.m. in Hamilton, a man in his 50s was found unconscious on a road and “in contact with live wires,” Hamilton Police said in a release.

Witnesses told police they saw the man trying to clear the wires from the roadway.

Shortly after emergency services arrived the man was pronounced dead.

Halton Regional Police say a man was killed while working to clear trees near Fourth Line and 20 Sideroad in Halton Hills just before 5 p.m.

Police said a tree fell on two men. One was pronounced dead at the scene while another was rushed to hospital in life-threatening condition. The Ministry of Labour is investigating.

The weather was also to blame for a tree narrowly missing a school bus in Mississauga on Friday afternoon.

Peel police were called to the area of Sayers and Clarkson roads just before 3:30 p.m. Several students were on board, but no one was injured, police said. 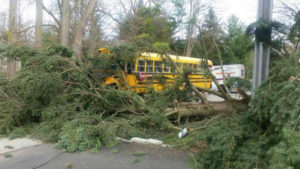 Service on sections of Line 2, between Kipling and Islington stations, and at Victoria Park to Kennedy stations, was suspended due to debris and a fallen tree on the tracks, but service had resumed as of 8 p.m. 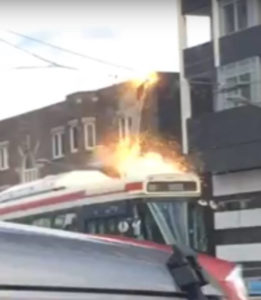 Two truckers from Quebec, Paul Ngoue-Ngameleu, 42, and Henadez Makia Mbeh, 50, are facing charges after 11 “foreign nationals” were found hiding in the sleeping compartment of their truck as they tried to cross the Ambassador Bridge. […]