Surrey Mounties are investigating the shooting, in which no one was injured. Police say the motive for the shooting may have been linked to a famous Punjabi singer Karan Aujla, not to those currently living in the house. In fact, the house where the shootings took place was earlier the house of a friend of Punjabi Singer Karan Aujla. The house was sold to Garcha family few months months ago.

According toRCMP, the house was attacked due to mistaken identity. It was also posted on TikTok as an ongoing feud involving Punjabi singer. The post, addressed to Karan Aujla, reads: “In India, Harry Chatha is waiting for you, we have been waiting for you on Europe tour and we know your sister’s house and also your fiancé’s boutique but we do not want to harm them. How long will you keep changing your addresses and hide from us? ” 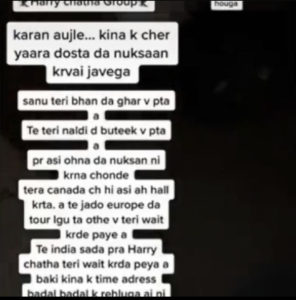 The house in Surrey has been riddled with bullets inside and out since the incident, in which the Garcha family lives, with bullet holes in the siding, roof and windows clearly visible. When the shots were fired, two people were sleeping upstairs and one was downstairs, the family’s parents were sleeping on a sofa by a window where the shots were fired. The family is worried for their safety now.
The RCMP is now in discussions with TikTok to determine what kind of information they can glean from the posting or account that created the post.