Const. Andrew Hong was honoured during his funeral on Wednesday for being a courteous and committed public servant who cherished his relationships with his family, friends, and co-workers.

Hong, a 48-year-old Toronto police officer who was tragically shot in an ambush-style attack inside a Mississauga coffee shop last week, was put to rest in front of Family members, dignitaries and thousands of officers.

Jenny, Hong’s widow, told the large crowd gathered at the Toronto Congress Centre where the burial was held that her husband had “two great loves” in his life.

“He had TPS and he had his family,” she described.

She recalled how his eyes lit up when he returned home from training new officers on motorcycles and joked that she came to think of TPS as “the other woman.” 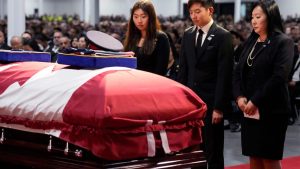 “Andrew gave me and my kids so many beautiful memories over the years. And although our time has been tragically cut short, I know Andrew would always be our hero and protector from up above.”

“To the Hong family, please know that we’ll always be there for you. Lean on us, count on us. Just like we leaned and counted on Honger,” said Matthew Moyer, a friend of Hong’s and the acting superintendent of traffic services.

A lot of the officer’s friends and co-workers spoke lovingly of the enormous personality of the deceased, referring to him as a “big teddy bear” who was always ready to “inflict” a laugh.

Today, we laid our cherished officer Constable Andrew Hong, Badge 7815, to rest. He was a husband, father and son. His life was defined by his family and public service. We will never forget him. #HM19, #HeroesInLife pic.twitter.com/RLc8ZM91xr

Around 12:10 p.m., the actual funeral began. Bagpipes played as eight officers in ceremonial gear brought Hong’s casket into the hall as it was covered in a Canadian flag.

Following his passing, his family released a statement, but they have asked for privacy while they are grieving. Both personnel of the Toronto Police Service and family members were welcome to attend the funeral.

Hong’s body was transported from the funeral home in Thornhill to the Toronto Congress Center during a procession that was open to the public. It was also broadcasted online.

Books of condolence were made available for the public to sign at Traffic Services and Toronto Police Headquarters until Tuesday. Visitation was also held Tuesday at the funeral home in Thornhill.