Three boys are dead after they were hit by a car while riding their bicycles and walking on a main road near Nelson House on Nisichawayasihk Cree Nation, Manitoba.Police said two of the children were walking and one was riding a bicycle. 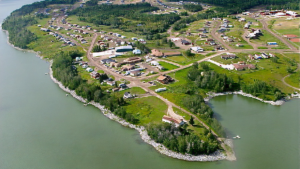 Chief Marcel Moody and council member Bonnie Linklater both confirmed the trio were riding their bikes and walking with a group of friends on PR 620, the main access road to the community, at about 10:30 p.m. Saturday when they were hit by a man driving a car.

Moody said, “The community is in a state of shock here. Everybody’s grieving, trying to figure out what’s happened in the community.”

RCMP said today that the two of the boys were 11 and the other was 13.

They say the driver, 27, was travelling southbound on the road with four passengers when his vehicle struck the children.

RCMP say the driver fled from the scene after the crash, then turned himself in to the Nelson House RCMP detachment at about midnight. Alcohol is believed to be a factor in the crash, said Sgt. Paul Manaigre.

Deputy NCN Chief Ron Spence said Sunday afternoon the entire community is coming together to help the families and vigil is planned to be kept on Monday.

Our hearts go out to the families of three young boys who left us far too soon. To the entire community of Nelson House and NCN, we mourn this heartbreaking loss with you.