Together We Can Defeat Diabetes: MP Sonia Sidhu, Diabetes Canada and the YMCA Mark National Diabetes Awareness Month in November with Community Event

Brampton residents had an opportunity to learn more about diabetes and its impact on individuals, families and the community during a well-attended event hosted by MP Sonia Sidhu, together with Diabetes Canada at the downtown Brampton YMCA on Saturday.

The event marked November as Diabetes Awareness Month in Canada, following a successful motion (M-173) put forth in Parliament earlier this year by MP Sidhu which was passed unanimously by members from all political parties. A similar proclamation was sponsored by MP Sidhu for the City of Brampton in 2017.

Participants heard about the importance of healthy eating by following Canada’s recently revised Food Guide, which is now offered in 28 languages. In addition, the importance of leading an active lifestyle which includes regular exercise was also highlighted. 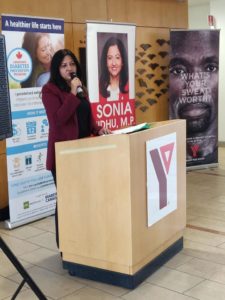 Gently used clothing and household items were also donated by many in attendance to Diabetes Canada as part of their ongoing program to help support diabetes awareness and assistance to those suffering from diabetes across the country.

More than 11 million Canadians are impacted by this epidemic. Every three minutes, another Canadian is diagnosed with this terrible disease, which is a major cause of strokes, heart attacks, kidney failures and other serious complications. 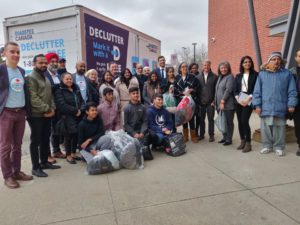 “When diabetes symptoms are caught early, the risk for future damage decreases. Awareness and education can help people remain healthy, identify early signs of diabetes and prevent onset for millions of Canadians. With an entire month dedicated to public education about the effects of diabetes, Canadians have an opportunity to grow and learn” said MP Sidhu. She also added “Canada gave insulin to the world, and I am confident that by working together with all levels of government, and stakeholders like Diabetes Canada, the YMCA and many others, we will defeat diabetes”.

August 1, 2020 Comments Off on Public Health Notice: Outbreak of Salmonella infections linked to red onions imported from the United States

Since July 24, there have been 55 additional illnesses in Canada reported in the ongoing investigation. Investigators have determined that red onions imported from the United States (U.S.) are a likely source of the outbreak. […]

Over the past several months, Canadians have been following public health advice and doing their part to help prevent the spread of COVID-19. Now, as we take steps to ease restrictions and safely restart our […]

“I didn’t know WE Charity might get grant until matter came to cabinet,” Trudeau says

July 30, 2020 Comments Off on “I didn’t know WE Charity might get grant until matter came to cabinet,” Trudeau says

Canadian Prime Minister Justin Trudeau goes before Parliament to face questions on WE Charity scandal, where insists of not knowing anything about a decision to give a sole-sourced deal to administer a $912-million student grant […]