The CN Tower celebrated its 42nd birthday in style on June 26th with the unveiling of the biggest renovation in its history.
Canada’s National Tower underwent a $16-million upgrade to its main observation floor with a heavy focus on making it more accessible. 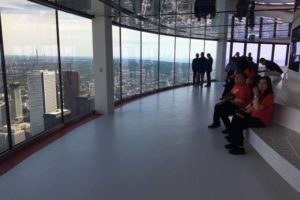 Today the #CNTower turns 42 and to celebrate we’re unveiling some major enhancements that will make the Tower even more thrilling and unique! pic.twitter.com/U4bRZJoBrV 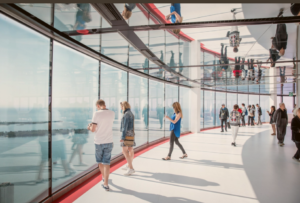 The renovation includes
* new floor-to-ceiling glass “window walls” and a double-decker glass floor, alongside a general opening up of the entire space.
*A new bistro-style drink and food options featuring Canadian-inspired cuisine from local producers and farmers.
* The new space can also be used for private events from anywhere between 80 to up to 800 people.
* The tower also launched its free CN Tower Viewfinder App which allows users the ability to see day and night views of the Toronto skyline and surrounding area on their smartphones or tablets. Users are able to identify over 90 landmarks.
The CN Tower first opened its door on June 26, 1976.

“[We’re] keeping up with the world and all the new buildings. Also, we’ve been working on making the tower more accessible. It’s 42 years old so some of our accessibilities aren’t the best,” said Neil Jones, chief operating officer of the tower.
It’s essential that CN Tower’s renovation and upgrades tie into our commitment to accessibility,” said John McBain, president and CEO of Canada Lands Company, the owner and operator of the CN Tower said in a statement.