After meeting Doug Ford, new Premier of Ont., who campaigned successfully on a populist platform, Prime Minister Justin Trudeau told supporters he wouldn’t let a worldwide trend of populism get in the way of his 2019 campaign. 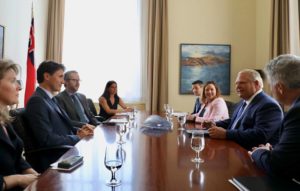 Trudeau was greeted with smiles, applause, and a lineup for selfies at a rally in Brampton, Ont., Thursday evening, — a decidedly different atmosphere than his meeting earlier in the day with Ontario Premier Doug Ford.

The two leaders met at the Ontario legislature at Queen’s Park, where they clashed on issues including asylum seekers and carbon pricing.

Trudeau said after the meeting that he outlined Canada’s refugee obligations to Ford, and also promised that a carbon price will be imposed on Ontario and residents of the province will receive the proceeds. 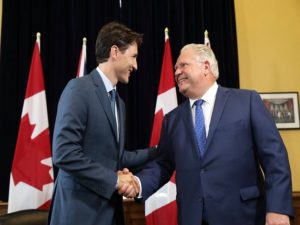 Ford’s office said Thursday that Trudeau’s government is responsible for what it called a migrant “mess” by encouraging asylum seekers to cross the border into Canada.

In Brampton, the PM told supporters that the federal Conservative Party has been “emboldened” by campaigns elsewhere in the world that “divide” people against each other, but that negative campaigning coupled with nationalism and populism isn’t a positive for Canada.

“I’m looking forward to putting our vision of an inclusive Canada up against our opponent,” said Trudeau.

“Differences are a source of strength, never a source of weakness. That is what our advantage is as Canadians.”

Trudeau  insisted that his government is “doubling down” on its investments in science and technology — statements that come after Ford fired Ontario’s chief scientist this week.

“That’s what investing in the future means,” he said.

Trudeau also said that working collaboratively with other countries is a strength of Canada, and referred to the renegotiating of NAFTA. He also mentioned Europe and Asia as regions the Liberals are working with, but he did not mention the United States.

He said, “People are trying to create wedges within communities and across communities. Well to that, Canada stands as an example that says no.”

A 17-year-old university student newly arrived from India was so badly beaten he was incapable of moving from the concrete floor after a random, unprovoked attack in a downtown Winnipeg bus shelter. Winnipeg police are desperate […]

The City of Brampton is reviewing the location of two Brampton Transit bus stops on a stretch of Queen Street West where one pedestrian was killed, another critically injured in separate collisions Monday, Nov. 20. […]